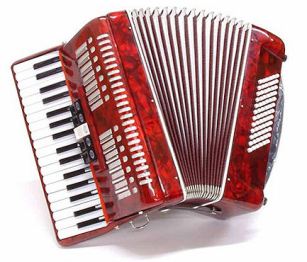 always been a controversy as to which type of accordion is the best. Some prefer the piano-styled modern accordion while other accordion players go for button accordions. But the entire concept of the question actually depends on the kind of accordion which best suits an individual player.

There are some major differences between the two primary accordion types:

(1) A piano accordion is straightforward owing to the fact that each key of it represents one and only one particular note. The arrangement of the notes is such that at every half-step, the player has to move down or up by one step. But in a button accordion, the buttons have a uniform arrangement and to play a single note, one has to play the buttons on the row associated with that note.

(2) A piano accordion cannot have more than forty five notes. But in the right hand register of a button accordion, there can be a maximum range of sixty four notes.

(5) On a button accordion, it is easier to play notes that are far apart which reduces the risk of playing the wrong notes. Playing a piano accordion usually requires a lot of practice and precision, because the player can mistakenly play a white

key that is not part of the note due to lack of reach.

ttoned one. The small size of the button accordion, however, doesn’t affect its range.

(8) Due to the wider surface area of piano keys, it is more comfortable to play on a piano accordion. Whereas, a button accordion sometimes requires the player to twist his/her fingers and wrist to press the buttons.